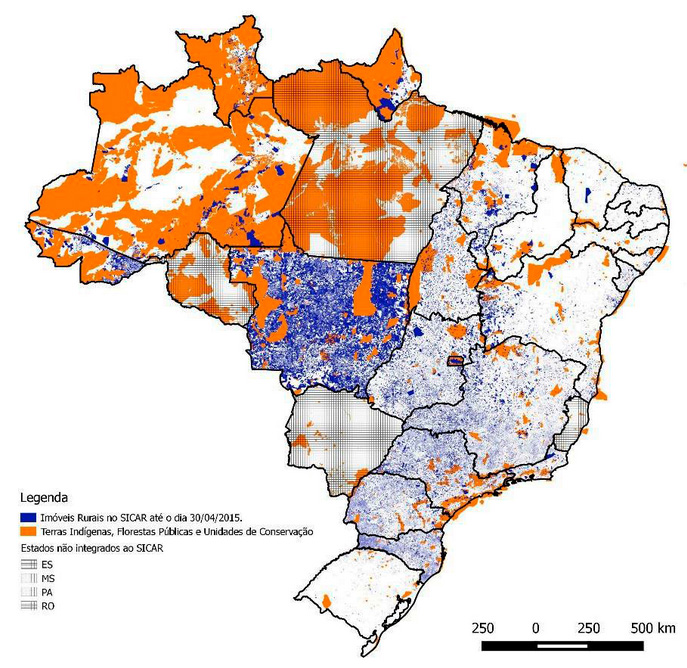 Brasilia, May 4, 2015 – The Rural Environmental Registry (CAR), the new tool Forest Code, complete one year with only a quarter of rural properties of the registered country, 52% of cadastrável area in the federal system and huge challenges for the next year, as bringing the estimated 4 million properties have not yet registered for the system, increase the transparency of information and take the role of incentive mechanisms to recover and preserve the native forests in property and private possessions.

The data was released todayby Environment Minister, Izabella Teixeira, and Agrarian Development, Ananias, who also announced the extension of the deadline for joining the CAR until May 2016, something already provided for in the Forest Code.

“The final year for the CAR will be of immense challenges. There is plenty to do in a short time and if the pace continues, in May 2016 we will not have all the necessary mechanisms in operation. We need more agility on the part of federal and state governments, “explains Aldem Bourscheit, a specialist in public policy at WWF-Brazil, a member entity of the Center’s Forest Code.

According to the Brazilian Forest Service, 1.4 million homeowners are in the national system – of these, 45% indicated intention to enter into an environmental recovery program. Pará, Mato Grosso do Sul, Rondonia and Espirito Santo have not integrated their systems to the federal base.

Rio Grande do Sul and most Northeastern states made little progress. The northern region is the one with the largest membership, with emphasis on the Mato Grosso: about 45% of the properties were registered, which represents about 70% of cadastrável area.

“The basis of entries needs to grow strongly and with more transparency than the provisions of the federal legislation. We need economic incentives for maintenance and recovery of native forests and quality improvement in the validation of entries, “says Aldem Bourscheit. “Normative Instruction that comes to transparency is very fragile. We need a system with the name of the properties, the owners and the CPF. Only then society as a whole and the productive sector will be able to monitor compliance or not the Forest Code in rural properties and possessions. ”

Economic incentives, such as Environmental Reserve Quota (CRA), too little progress in the almost three years of the new Forest Code. These benefits are essential for people to not only meet the Forest Code but also maintain their forests surplus. The future of the decree follows CRA under discussion within the federal government, and a law of Payment for Environmental Services can be approved until November by Congress.

Discrepancies
The largest membership in the first year of the CAR came from small: among registered properties, 87% have up to four fiscal modules. As for the settlements, 65% of them are already at the base and the other waiting to be sent in the coming weeks. “The law ensures environmental compliance and access to public credit. But whoever does not enter the CAR next year is not entitled to these benefits, “said Izabella Teixeira.

To the minister, the resistance of the landlords to sign up because “strangeness”. “In theory, they would find it easier to access the system and fill it, and it was they who brought the discourse of the need to increase legal certainty in the field for the discussion of the Forest Code. CAR gives this security, “said the minister. “Some segments, such as soybeans, are moving to have no barriers for export. Now the other sectors, like cotton and sugarcane, also have to go. “