The Supreme Court and the Forest Code 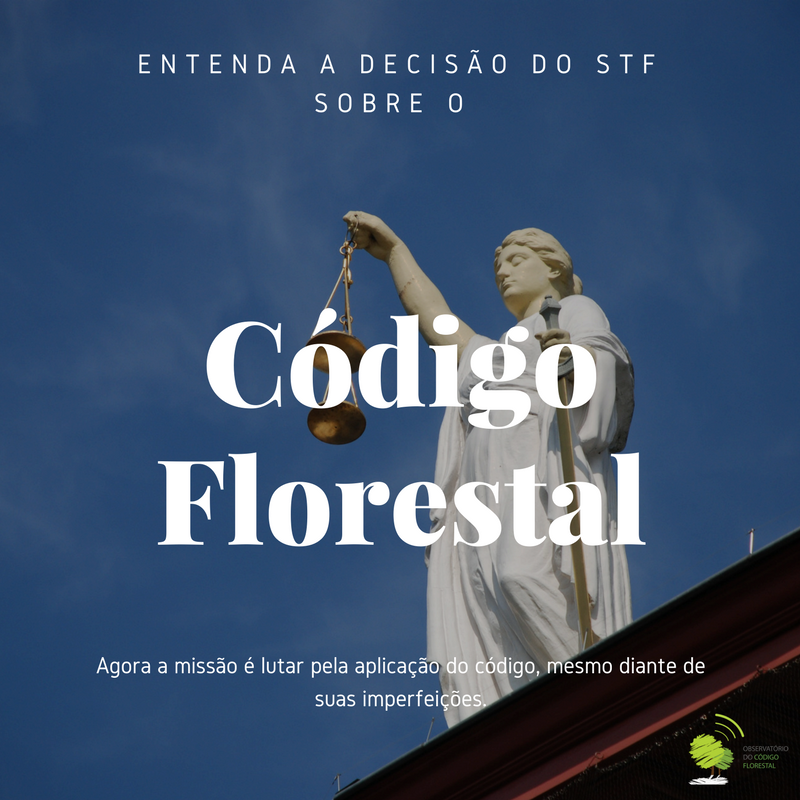 The Supreme Court began on 14.09.2017, the judgment of the Direct Unconstitutional Actions numbers 4901; 4902; 4903 and 4937, brought against the Law 12,651 / 2012 establishing the protection of native vegetation, and is called improperly, the new Forest Code. view of the request of the president Carmen Lucia interrupted the trial after the vote the rapporteur Luiz Fux. The outcome of this trial will clarify important issues concerning the extent of forest protection.

One of the outstanding aspects of the definition concerns the real estate recovery duty deforested in the past that do not have the percentage of native forest protected by law – the so-called legal reserves. This varies according to the biome and the region in which the property is located: 80% of the forest area in the Amazon; 35% in the savannah area in the Amazon and 20% in other biomes and regions of the country. The establishment by law of these percentages has changed over time.

The problem in this regard is the need to preserve in previous legislation, there had been fulfilled by many owners and possessors. Thus, the Law 12,651 / 2012 sought to exempt part of the duty of the properties to suit your requirements, establishing an exception rule: those who carried out the suppression of native vegetation, respecting the percentage of legal reserve under the laws in force at the time the deforestation occurred are not required to promote the regularization measures established by that law, which requires recovery of the area. This is one of the reasons that gave rise to the filing of the unconstitutionality of Shares.

The decision of the Supreme Court in this case has a lot to do with important political issues on which the Supreme manifested in recent years. After all, its effects reverberate strongly in preserving the environment, requiring clear and consistent response that signals a solution to the conflict.

Recognizing the legal validity of this legal device results in a significant reduction of the protected area to be reclaimed. This decrease happen precisely in the most threatened biomes. The Atlantic Forest (historically used more and has about 20% remaining), the Savannah (which today is the object of extensive degradation) and Pampa (which left about a third of its cover). In the Cerrado, for example, this situation worsens to the extent that regulatory state laws the new Forest Code have established questionable understandings about the timeframe in which the biome has to be protected by the legal reserve. In the spectrum more strictly legal, the Supreme Court decision can impact the interpretation of the acquired rights institutes, perfect legal and intertemporal application of environmental law, reflecting on incentives / disincentives as law enforcement in the future. Note that the scope of the release of the obligation to repair for those who are undocumented, may induce the perception that the breach of the law will always be amnestied in future legislative measures.

The central legal issue in question concerns the application of environmental law in time and their interaction with the institutes of the acquired right and perfect legal, which are protected by the Constitution. It translates into the following question: latest law more protective of the environment, is applicable to all properties or those who have been cleared under the aegis of previous legislation would have acquired the right not suit required in the new law? Or, from another perspective, the situation would be suppression carried out under the auspices of the previous law protected as perfect legal?

The figure of the acquired right aims to protect the rights of holders constituted under a standard that later came to be changed, so that will not be affected due to the change from the norm. The acquired right is the result of a fact, able to produce it, according to the applicable law at the time of its occurrence. In this case it acquires the right as a result of an act or legal fact able to constitute it. There is need for a fact provided by law, in the abstract, to be able to create the right so the fact occurs. The most characteristic example is the employee’s retirement possibility satisfying the conditions to require it under an amended law (legal fact) that can do it in the new law in force even without meeting the conditions of the latter. Or owner who obtained a license for construction (legal act) under the aegis of a law and can do it after the legal change. The act or legal fact in question must have performed in full.

Diversa is the situation that occurs in relation to the implementation of the new Forestry Code. Can not identify the removal of vegetation performed an act or legal fact that has been realized in full. Rather, the object of the law are the incidents protection rules on a situation that is prolonged in time, which is the exploitation of productive activities in the property. As I wrote the late minister Teori Zavascki, there is no vested right to maintain unchanged legal regime. That is, there is no right to maintain the rules applicable to a situation after the amendment. For this reason, owners and possessors were achieved by subsequent legislative amendments.

Thus, as the former forest code was 1965 and established the percentage of 20% and 50% of preservation, the successive changes it underwent in 1989 and 2001, this last coming to the percentages set out in current law, forced to compliance with the new law, as well as the registration of the legal reserve the property registration office, required since the 7803 law 1989.

These changes have not established exceptions and began to apply to all properties in the country. Those in violation of its rules passed to the illegal situation. So under the new and current law, to speak of acquired rights would recognize acquired rights to the offense, which, of course, distorts the institute.

Already the perfect juridical act, correlate Institute, but several of the acquired rights, refers to acts or said legal transactions has improved, that is, which were completed according to the requirements and legal conditions for this.

Thus, asking whether the forest suppression carried out under the aegis of existing law would be a perfect legal act refers to other issues. What is the proper legal act perfected? The removal of vegetation is an action that is not characterized as a legal act. It would be the legal reserve then this act? If affirmative response, it remains to consider what were the conditions for its improvement. As the 7805 law 1989 has demanded the registration of the reserve, without exempting owners who already had protected area of ​​this requirement, only properties with established and endorsed reserves reached the perfect legal act and only these can have it recognized by the new Code forest 2012.

Not since Article 68 referred to a statement of rights acquired situations and perfect legal act, the question might be, broadly, to establish an amnesty to undocumented owners, as the law intended.

Environmental preservation is intended to provide adequate quality of life to the inhabitants of our planet. It is precisely because of this assumption that lawmakers edit rules prescribing rules of environmental preservation, limiting often individual colleges. In this sense the previous standards were issued to Law 12,651 / 2012.Thus, the company has fair expectation in strict compliance with these rules. It can not, on pain of breach of the principles of legitimate expectations and legal certainty, be surprised by a new law that aims to amnesty behaviors that were expressly prohibited. Thus, it can be deduced that the constant standard of art. 68 violates these principles.

Although traditionally these principles have turned to the protection of individuals against acts or Directors of the normative power exercise, the fundamental rights protection diffuse nature, such as the right to the environment, provides be invoked to protect these interests in contexts where certain regulatory change smite the legal certainty and reasonable expectation of continuity of environmental protection rules.

Indeed, the previous legislation in 2012 established rules of public order deemed necessary for environmental preservation. In force for more than decade, resulted in actions of owners and possessors that diligenciaram to enforce its rules.

Understanding the existence of the duty to adopt the necessary measures for the restoration and recovery of legal reserve and annotated on it became reiterated in STJ.

Hence, Article 68 of Law 12,561 / 2012 also undermines the principle of equality, establishing preferential treatment to those who breached the law.

Several owners and squatters sought to meet the then existing legislation, probably incurring some costs. In this sense, the norm of the art. 68, to treat in a special way those who did not fit the previous legislation is giving an anti-equal treatment to other owners, wounding therefore the principle of equality.

So for violating principles set out in the Federal Constitution, art. 68 of Law 12,651 / 2012 is unconstitutional.

It is expected that the Court recognizes the constitutionality of the use of constitutional institutes referred to illegal situations. Beyond the mere technical and legal interpretation, analyzing the purpose of the law, one can see how the application of that rule affects the necessary balance of forest preservation and consequently, for their ecological services related to water availability, climate control ; pollinated seeds, pest control and others that hopefully will keep the essential conditions for survival in this already.

 ?  Luis Roberto Barroso points out that the principle of legal certainty in the public have to correspond to the principle of legitimate expectations in the relations of private law, which prohibits the contradictory behavior and requires consistency between the action of the parts that should not create expectations of behavior and play another .. Course of Constitutional Law. São Paulo: Saraiva, 2nd edition, 2010, p. 290. The extension of the principle to the public law, namely the administrative law is the subject of Patricia F. Baptista doctoral thesis. Legal Protection and Security Legitimate Trust in Administrative Law . Faculty of Law, University of São Paulo, in 2006.