The application of the Forest Code is still on hold 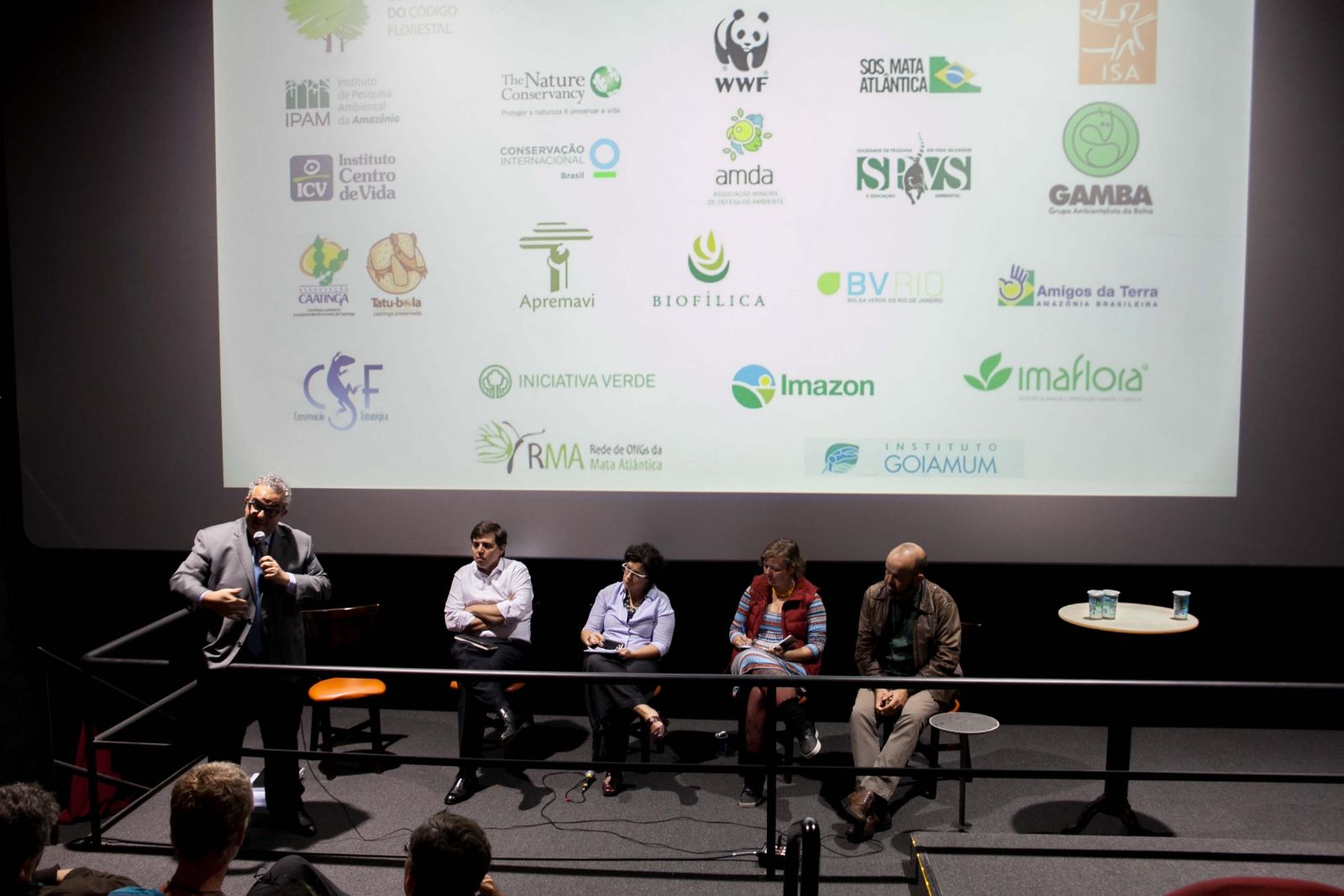 government representatives, researchers, journalists and environmentalists gathered at the end of May to discuss the implementation of the Forest Law in the state of São Paulo. The event “Forest Code in Sao Paulo: impasses and opportunities”, which took place on the 25th all morning in São Paulo, showed how each sector of society sees the law and its implementation is uneven. In the audience, more than 110 people interested, including lawyers and other experts in the environmental area, scored the event with questions and references of law enforcement in other states.

The event was divided into two stages. The first featured a contextualization of the five years of the Forest Code, made by Luis Fernando Guedes Pinto, representing the Center’s Forest Code and the Forest More PRA São Paulo. According to him, the biggest advance of the Code was the establishment of an Environmental Registry of rural properties (CAR), which enables the environmental planning at the individual level and landscape. It also allows for greater transparency on the use of land in Brazil. “The concept of the Environmental Regularization Plans (PRAs) are prepared for each state, following their socioeconomic and environmental characteristics would also be a potential strength of the new law,” he says.

“However, despite the great increase in the CAR, five years the law goes not got off the ground because the federal government and the state have not yet defined the main tools for its actual implementation in the field,” adds Guedes Pinto. For the expert, the CAR has not been validated and many PRAs were not defined. “Some PRAs, rather than advance, turned back in the states. Economic incentives have not yet been defined and do not change the paradigm of just under command and control for the operation of an environmental law. Anyway, despite the potential advances in five years we are far from the Forest Code fulfill its purpose of ordering the preservation of native vegetation in rural properties, “he concludes.

Then Professor Gerd Sparovek (ESALQ / USP) introduced the thematic project “Priority areas for compensation Legal Reserve : research for the development of a tool to aid decision-making and transparency in the implementation process of the Environmental Regularization Program ( PRA) in the State of São Paulo “, conducted with the assistance of São Paulo Research Foundation (FAPESP) – the presentation can be seen here.

According to Sparovek, it is very difficult to find an economist than financial, that can expand their looks for the environment and the importance of it. Research conducted by it has shown that there may be a reduction in vegetation cover in areas where it is impossible to have compensation. Worse, this deforestation occurred in areas of very high ecological importance. Even the native vegetation was unprotected in areas without agricultural aptitude. The professor showed that the majority of rural properties in Brazil with a deficit of permanent preservation areas (APPs) are the largest.

“The implementation of the law of the ingredients follow the same logic of agribusiness. That is, the logic of agricultural development programs,” he said. That is, the forestry law has positive points, the CAR is one of them, but there is a question as to their adherence and effectiveness. There is a political polarization that prevents the development of law enforcement. And the federal government has just passing the legislative and executive powers to the states. “In São Paulo, it appears that the environmental area of ​​the state seems to be headless or difficulty of being mediator”, caused Maurice Tuffani, journalist and Direct site editor of Science who brokered this first panel. The others agreed with the idea. “In São Paulo, lack leadership to change. Lack want to change,” said Guedes Pinto.

Then began the debate on the implementation of the Environmental Regularization Program (PRA) focusing on legal action ( direct action of unconstitutionality) that suspended the state. The speakers were positioned on the regulation and the action pointing possible benefits and losses that may arise: Rubens Rizek, deputy secretary of the Secretariat of Agriculture and Supply; Francisco Godoy Bueno, vice president of the Brazilian Rural Society; Ivy Wiens, the technical advisor Environmental Institute (ISA); Roberto Resende, representative of Forest More PRA São Paulo; with the mediation of Giovana Girardi, Estadão environment reporter.

Articles of regularization of the Forest Code in Sao Paulo questioned by prosecutors are: 9 – The period of 20 years to restore the APPs and RL all compensation arrangements; 12 – Allows reviewing the terms of appointments or similar instruments; 17 – Features aquaculture activity as social interest; 27 – It provides no protection from the Cerrado and amnesty RL; 35 – Allows review of limits of Legal Reserve already established; 40 – Allows APPs occupation legalization in urban areas.

“In these his five years, the Forest Act is still incomplete in practice. Despite some advances, missing many points for it to work. As, for example, regulations and especially decisions for its implementation, for the opportunities it presents can be realized, “says Roberto Resende, Observatory representative of the Forest Code and the Forest More PRA São Paulo in the second table. Ivy Wiens presented the problems that traditional peoples and communities face when making the Rural Environmental Registry (CAR). “The CAR was not thought to collaborative land management,” Wiens said.

Including the problems identified are: full support of governments to carry out the CAR in areas not titled, but self-reported; ensure equality in the CAR treatment for Quilombo Territories; consider the traditional use of natural resources in territories respecting the full and not fragmented territory. At the same time, Wiens showed the opportunities that the environmental compliance program (PRA) can offer to them and other rural groups such as the collection of seeds and seedlings, Payment for Environmental Services (PES) and Environmental Reserve Quota (CRAs) – securities representing vegetation that can be used to fulfill the obligation of legal reserve in another property.

“We have to be honest with the state of São Paulo for excellence performance,” said Francisco Godoy Bueno, vice president of the Brazilian Rural Society, as a counterpoint. He believes that the law did not give permission to deforestation, but rather transitional rules to preserve lowering taxes on situations that did not exist. For him, environmental services need to become active: “Fact, value and norm. None of the three can prevail, “says Bueno.

Rubens Rizek, deputy secretary of the Secretariat of Agriculture and Supply, said that when the law was proposed, “take a big scare because it was complex.” And said: “The Forestry Law has to be fulfilled.” As Bueno, he believes that St. Paul pulled the speed of the federal government in this matter. . “We launched the National System of Rural Environmental Registry (Sychar) in front of everyone,” he said On the law enforcement points in São Paulo, questioned by prosecutors, and reported the event by Roberto Resende, Rizek says: “the Paulista law not overstepped the Federal law”. “Before comply with the law in 20 years than never do,” he added.

“We, the government, we are trying to have the minimum conditions to give security to our team. We need to give a minimum of legal certainty for the employee, and left the state law,” said Rizek. For him, one should leave the discussion in the Supreme without waiting to do the minimum that the law had to do. Promising a heated debate over the last five years of law submitted to the event. Now, all sectors are awaiting the next steps of the prosecution and that the CAR is completed. And so, the event has become a milestone in the environmental agenda of São Paulo. A place for everyone to update on the implementation of the backstage of the law and debate different positions, something so necessary for our society. Even now, in this historical period in which we live.

The Center’s Forest Code (OCF) consists of a network of 23 organizations that share the overall objective of monitoring the implementation of the new forestry law (Federal Law 12651/12) throughout the country, especially the performance of the Environmental Adjustment Programs ( PRAs) and its main instrument, the Rural Environmental Registry (CAR), to generate critical mass data and collaborate to maximize the positive aspects of the new law and mitigate its negative aspects.

The # MaisFlorestaPRASaoPaulo is a movement institutions, individuals and collectives that recognize the importance of forests to the quality of life of São Paulo and work for public policies as the State Environmental Regularization Program (PRA) make possible a real increase its coverage forest. The movement began in January 2016 when a group of institutions and individuals, dissatisfied with the results of this program and construction process, articulated to claim greater transparency and objectivity in the rules of implementation. He asked the government a more democratic process and protested against the repeal of Resolution 004/2016 of the Secretariat of the Environment, which established some criteria for the Paulista PRA.